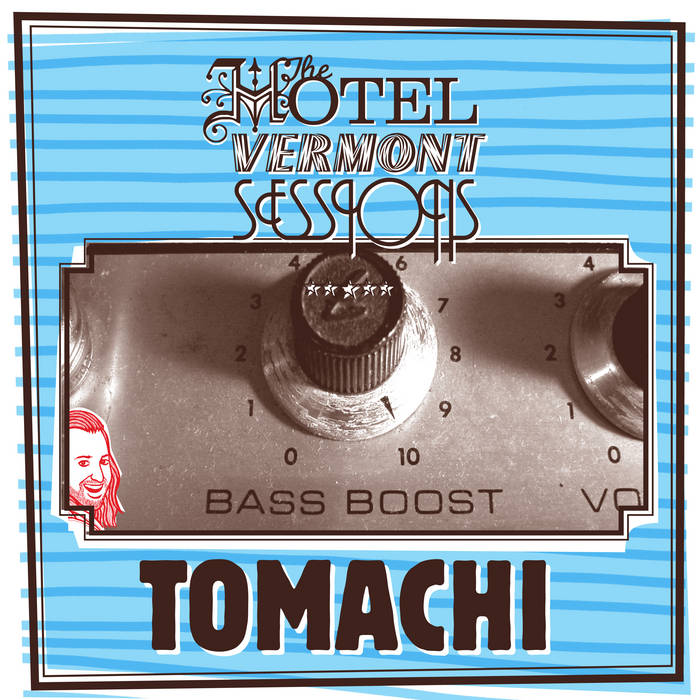 Drummer, keyboardist, and composer Tomachi's debut solo album ‘The Hotel Vermont Sessions’ was the culmination of several years worth of pent-up musical drive, held in check while playing in a variety of bands (SJD, One Million Dollars, Breaks Co-Op, Dam Native, Foghorn, The Roughness, Jungle Fungus and more).

(bass solo)
Stay...
Stay...
(laughing)
Stay this way forever
Wait hey probably clean.... Nah it’s too digital
Track Name: Tomachi featuring Dam Native - Mic Is Mine
[Sung Chorus 1]
Nah nah me rebel, dem different people,
evil here for ever, never are it equal.
On the next level, higher native rebel,
tower with the higher power, toy better settle aight.
[Rap Chorus 1]
The mic is mine, it has been for a long time.
I strike with the unique speech that is divine.
A pioneer of horified hiphop is back,
have to do what feels right now there’s no looking back.
I’ve caused all type of wreck on these streets you bet,
with infinite rhymes which ones am I supposed to select next.
I use a power the towers high above me and you.
The mic is mine, with an upraised hand of Ringatu
[Sung Chorus 2 repeats]
[Verse 2]
Center stage I feel the rath of the seas,
demonstrate techniques of Maori poetry.
I feel the tides turning, yearning for mcs
a true warning stalking all toys with ease.
The go getta, seeking out mics with my mic seeker,
you mess with us you mess with Tuma Tauenga.
Haimona, Manukau, Campbell, Pomona,
black swandry jackets, sons of thunder...
[Rap Chorus 2 repeats]
[Verse 3]
When I banished myself from a circle of Steve Urkels,
phantom of the rapra cyborg stature.
Lone unequivalent paying mad dividends,
so many custom made tracks, me and black, we could swim in ‘em.
Arch rival unattached to my style its wild,
not guilty cause im silky at all of my trials.
I’d be the best man, without walking down any isles,
I never to drugs, thats why im always in denial.
I kick beats yeah, deep from my intestine,
like Einstein high in minds eye moko mo kai.
I blast off deep into the galaxy,
black man, even the black hole rejected me, the mic is mine.
[Sung Chorus 3 repeats]
Track Name: Where I'm At
[Verse 1]:
Sitting down here, in a one room shack.
So many coloured shadows, creepin’ out the cracks.
Pass me that bottle, cut me some slack,
cos things couldn’t get rough you took a sander to my back.

[Verse 2]:
If you could find me, by the old oak tree,
then won’t you sit right down and see what you can see.
A little old bird, a little old bee,
one said to the other it sure sounds nice to me.

[Verse 3]:
If you got a problem on the inside, its time to let it out.
If it aint broke don’t fix it, thats what im about.
Living from bottle to bottle, and hand to mouth.
Life short changed me, so I short changed myself.

[Reprise]:
Short changed myself today for the night it slipped away from myself yeah.
[skat]
gunna lick it back again.
just keep it cool and make it simple Aiiight!
Track Name: Steak Sandwich
"partay-partay-partay-partay"
Track Name: Tasty Omelette
[Verse 1]:
He likes to stay up late,
and hang out with girls.
Not makin’ plans, by holding hands,
offering diamonds and pearls.
He makes good use,
of his time.
Busy being, while hes doing,
monitoring his mind.
Ask him a question,
and he’ll respond spontaneously,
with wisdom and good humour,
cos hes a man, at ease.
He’s a Chill Out Man.....
Chill Out Man...
Chill Out man... etc